There are several great unsolved math problems that are perfect for elementary students to explore.  One of my favourites is the palindrome sums problem.
In case you aren’t familiar, a palindrome is a word, phrase, sentence or number that reads the same forward and backward. 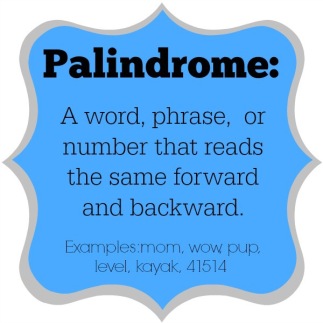 The problem itself comes out of this conjecture:

If you take any number and add it to its inverse (numbers reversed), it will eventually become a palindrome. 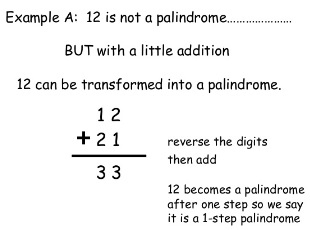 As you can see with the above examples, some numbers can become palindromes with 1 simple addition, like the number 12.  12 + 21 = 33.  Can you think of others that should take 1 step?  How did you know?

Other numbers when added to their inverse will not immediately become a palindrome, but by continuing the process, will eventually, like the numbers 46 and 95.  Which numbers do you think will take more than 1 step?

After going through a few examples with students about the process of creating palindromes, ask your students to attempt to see if the conjecture is true (If you take any number and add it to its inverse (numbers reversed), it will eventually become a palindrome).  Have them find out if each number from 0-99 will eventually become a palindrome. Ask students if they need to find the answer for each number?  Encourage them to make their own conjectures so they don’t need to do all of the calculations for each number.

Mathematically proficient students look closely to discern a pattern or structure. They notice if calculations are repeated, and look both for general methods and for shortcuts. (SMP 7)

Some students will notice:

Thinking about our decisions:

The smallest of decisions can make the biggest of impacts for our students!

So, at the beginning of this post I shared with you that this problem is currently unsolved.  While it is true that the vast majority of numbers have been proven to easily become palindromes, there are some numbers that require many steps (89 and 98 require 24 steps), and others that have never been proven to either work or not work (198 is the smallest number never proven either way).

Some final thoughts about this problem…

After using this problem with many different students I have noticed that many start to see that mathematics can be a much more intellectually interesting subject than they had previously experienced.  This problem asks students to notice things, make conjectures, try to prove their conjectures and be able to communicate their conjectures with others…  The problem provides students with the opportunity to both think and do.  It offers students from various ability levels access to the problem (low floor), and many different avenues to challenge those ready for it (high ceiling).  It tells students that math is still a living, growing subject… that all of the problems have not yet been figured out!  And probably the most important for me, it sends students messages about what it means to really do mathematics!